An orchard very much alive

Along this route we can discover our orchard area, our huerta, a farming area that still lives and wants to continue being just that, and a part of our collective memory with very deep roots, the origin of the wealth, progress and culture that we defend as our own.

We suggest you begin this walk along what is left of the road CAMÍ DE FARINÓS that has almost disappeared. We leave the square and walk north along Masquefa Street until we reach Valladolid Avenue. The road began here, but today the original parts of it are invisible in the most central area.

We cross Valladolid Avenue and enter a recently constructed block, where a couple of buildings that have disappeared used to stand along this road. They were the Saco farmhouse, ALQUERÍA DEL SACO, and the slaughterhouse, MATADERO. Inside this block the original tracing of the road can be seen. 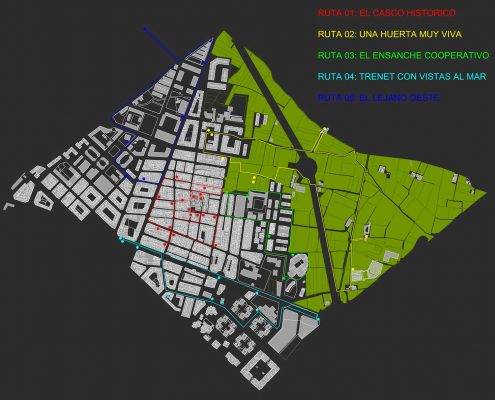 We continue towards the sea through the farming area around Ronda Nord. On the other side of the roundabout, on our left we will see a road that leads to MOLÍ DE FARINÓS, an old 19th century flour mill on top of the irrigation channel that marks the border between Valencia and Alboraya.We return to the road and follow it along the irrigation channel towards the sea until we come upon the old VIA XURRA, which used to be the site of the railway to Aragon. Today it has become a popular green path and bicycle track that traverses the villages of the farming area north of Valencia.

Taking this track south, we come to the intersection with the road Camí de Les Fonts. Here, on our left, we discover the historical farm ALQUERÍA SERRA, which is now in a bad state of repair, even though the building is registered and protected.

Coming back to CAMÍ DE LES FONTS, it will take us to the cemetery, CEMENTERIO DE BENIMACLET, which today finds itself somewhat separated from the neighbourhood because of the abrupt interruption that Ronda Nord has imposed, but it continues to be a place of emotional as well as cultural meaning because of the relevant neighbourhood personalities that have their resting place there.

We can go to the beginning of the VÍA XURRA, where the railway station known as ESTACIÓN DE ARAGÓN used to be, follow again Ronda Nord and walk towards Camí de les Fonts in order to turn left towards Benimaclet.

Around here there are a number of farmhouses that should be noted. Some of them are in recent use, such as the CENTRO SOCIAL OKUPADO. A little further on we come to one of the most popular victories that Benimaclet residents are proud of: the urban gardens, HUERTOS URBANOS DE BENIMACLET,. The history and process of how they came about should be told as an example of neighbourhood struggles and urban and human sustainability.

Just a few metres from here is where the farmhouse ALQUERÍA DE PATACH, used to stand. It was a beautiful specimen of the traditional Valencian farmhouse. Sadly it no longer exists.

To wind up this route we have to cross a barren wasteland, destroyed by real estate interests. It used to be a productive orchard area that residents now unselfishly try to restore.

Finally we reach Valladolid Avenue and the premises of the neighbourhood association, which among many other things is working to defend the life of the orchard area, which now has new value as a part of the urban landscape.

Download this route in pdf format from here. (still only in spanish)