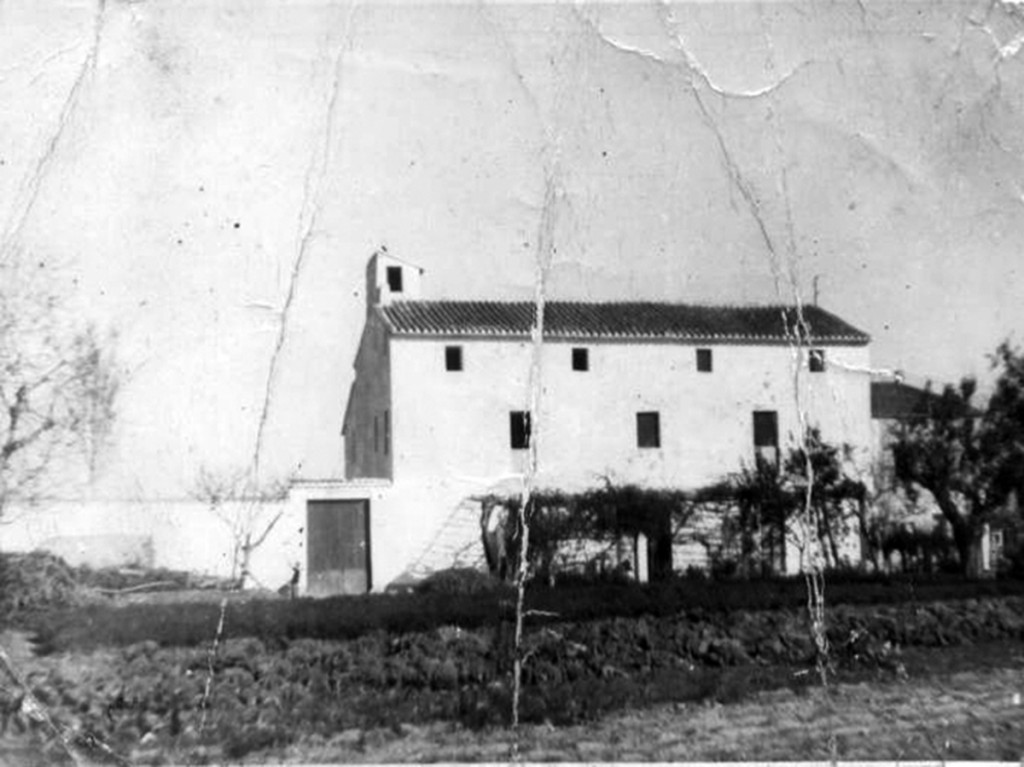 The Saco farmhouse, which no longer exists, was another emblematic place of Benimaclet. In order to reconstruct its history, we have spoken to María Belenguer Suay, the last person to live there.

This farmhouse was located on a piece of land between San Columbano, Poeta Ricart Sanmartí, Masquefa streets and Valladolid Avenue. Currently, this piece of land is being used as a car park, due to the large number of vehicles in the Benimaclet area.

María tells us that this farmhouse, with its huerta (orchard), belonged to the Counts of Trenor, an aristocratic, military and business family, who lived in La Paz Street and who owned large areas of land. Maria’s husband’s grandparents, Isidro Senent and María Penya, were the tenants of the farmhouse and its huerta, which stretched as far as the present-day Emilio Baró Street. In 1933, they became the farm owners, as they were able to purchase it from the counts. It was a large country house. Upstairs there were several rooms, and downstairs there was a kitchen and a living room. As they needed fertiliser for the land, they kept animals, especially pigs, from which they obtained both this fertiliser and food for themselves.

As was normal for the time, the people who worked on the farm were day labourers who slept and ate in the farmhouses during sowing or harvesting season. During the potato season, the smallest potatoes were boiled in big pots, as they could not be sold. After they had been boiled, they were covered with sacks. People say that, when the labourers were hungry, they used to say: Amo, ¿saco una? Which means: Master, may I take one? Referring to the boiled potatoes. Passers-by would hear the same question over and over again, and would say: These people are always saying saco, and saco once again. That is why María remembers that her family used to say that the name of Alquería del Saco, comes from this “saco”, from the verb sacar (to take out).

María was born and spent part of her life, in the “last house of Benimaclet”, in number 3 Cabanyal Road. This road no longer exists, but part of it followed what is now Ramón Llull Street. When she married her husband, Jose Senent Penya, in 1956, she went to live with him and his family in the Alquería del Saco.

This alquería was a really important and emblematic place in Benimaclet, because on many occasions, and for many reasons, it was a meeting place for the local neighbourhood. They were a much-loved family because, generally, they did not have problems with anybody: “People came to celebrate the Easter holidays, children came to play, young people dressed up… The priest of Vera came around here quite often, he used to sit down to take confession by the irrigation channel.”

María remembers that her father-in-law told them that they had a little shop in the alquería, where the farm workers used to go to have lunch. They also sold wine and other essential goods.

After the civil war, the church was visibly damaged, and it could not be used for celebrating mass. During the church restoration, mass started to be celebrated in the Alquería del Saco. Christenings and communions were celebrated there as well.

Later, this alquería was used as a wholesale warehouse. Potatoes were bought and packed in bags to be sold to small supermarkets. There were even a few export activities due to the demand for “wicker baskets with potatoes”.

Due to the proximity of the “trenet” (train), and the Aragon train line, there were many railway workers living in Benimaclet. They celebrated “railway workers’ day” on the third Sunday of May. Isidro, Maria’s husband’s elder brother, worked for Renfe forging iron, and he was a clavario (religious devotee) of this celebration. It was common that a statue of the Virgin Mary stayed at a clavario’s house. Thus, the little “Virgen de los Desamparados”, which belonged to Renfe, stayed at the Alquería del Saco during the celebrations one year, with all the crowds of people and the festivities that came with it.

Around 1987, a man who was preparing a report about Valencia’s huerta, walked by the alquería and said that it was a shame that it was going to be demolished. That is how María discovered what the future of her home was going to be. She did not know anything about it, so the man explained to her that the council had plans for some new constructions and would be building on the land where the alquería was located. María said: “No way, over my dead body!” But unfortunately, there was nothing that she could do to save her beloved alquería from the savage urban development that was being carried out in Valencia.

María’s husband had passed away on 16 July 1980, so he did not live long enough to hear about it. It was not really a proper expropriation, but they were forced to sell, because if they had not done it at the beginning, it seems that the land would have been expropriated, and they would have received a much smaller economic compensation. On the 14th of July 1993, they had to move out. A tall building of flats was constructed next to the alquería and a few days later, the Alquería del Saco was demolished. Today, from her balcony, María can see the piece of land where the alquería used to be, full of life, and this makes her feel powerless. There are still a few trees that her husband planted in his time; today parked cars surround them.