The Old Alboraya Road is a continuation of Alboraya Street, beginning in what used to be Tránsitos Road, now Primado Reig Avenue.

As one can tell from its name, it used to be a road that linked the centre of the city to the village of Alboraya, and vice versa. The main point of access to it was the Trinidad Bridge.

The road communicated the areas of Orriols-Rascanya, San Lorenzo and Benimaclet with each other, along lots of curves. The Rascanya irrigation canal crossed it (as it still does, of course).

In parallel with it ran the railroad tracks of the “Little Train” (Trenet), belonging to the FEVE company, later FGV. It went from the Pont de Fusta Bridge to Rafelbuñol and crossed the road near the railway stop of San Lorenzo (which was situated by what is now Alfahuir Avenue, approximately in the vicinity of Mercadona).

Around this point it also connected to its right with the Engineer´s Houses Road (Camino Casas del Ingeniero), coming from Benimaclet.

Close to the intersection of the two roads were the Copa Houses (Las Casas de Copa). Also nearby was a place called El Pellero (The Skinner). The person living there sold rabbit pelts. 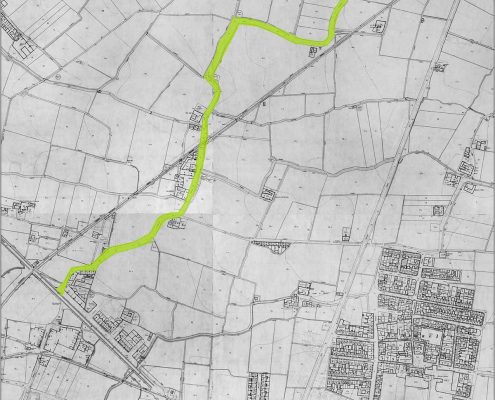 A little further away from the two roads you would see “La alquería La Purísima” (The Mary Most Pure Farm), which was saved from being torn down during the development of the Orriols Plan (PAI) at the end of the 1990s and beginning of this century. A few years ago it was made into a Day Centre for Elderly.

The name Copa, just mentioned, also turns up in the book “La Barraca” by Vicente Blasco Ibáñez. The bar there is mentioned in some parts of the novel.

The road went on, always meandering, crossing the irrigation canal “Els Orriols” and passing shortly after that “La Alquería Crema” (Crema Farm), which stood exactly at what is now the field of the Levante Stadium (el Estadio de El Levante U.D.).

That stadium used to be situated between Convento Carmelitas Street and Pont de Fusta, and was then called “Vallejo”. It was inaugurated at its present location in 1969, then with the name Estadio Antonio Román.

After crossing the surroundings of “La Alquería Crema”, the road entered the territory of the village of Alboraya.