This walk takes you to some of the places farthest away from the historical centre. It stretches from the other side of Emilio Baró Street to Alfahuir Avenue. Alfahuir used to be the old road that led to Alboraya. Today it constitutes the administrative limit of the barrio. But these places have always been intimately linked to our collective memory.

We start out from Torreta de Miramar Street, near the corner of Dolores Marqués Street. This is the street that is named for an old and much loved farmhouse of Benimaclet, GRANJA DE MIRAMAR, Its name was TORRETA DE MIRAMAR, and it is remembered for its typical rural Valencian construction with a view of the Mediterranean Sea. 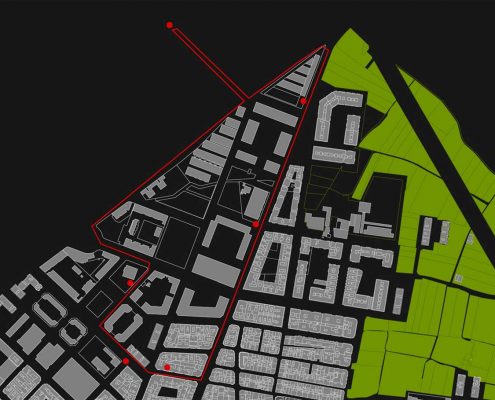 We continue west along this street, cross Dolores Marqués and come to the school, COLEGIO CARLES SALVADOR, that is named for the famous Valencian poet that used to live and work in Benimaclet.

A bit further on, where the school fence ends, we turn right on Viver Street, to get to the former farmhouse ALQUERÍA DE LA PURÍSIMA,. It has been recently restored and is now a day centre for disabled elderly people.

At Valladolid Avenue we turn left to Alfahuir Avenue and arrive at the approximate location of the former railway station, ESTACIÓN DE SAN LORENZO, which was a stop for the “trenet” (little train) that ran between Valencia and its northern orchard area.

We cross Alfahuir Avenue and continue towards Alboraya along this major street with heavy traffic until we get close to José Chabás Street, situated between blocks of flats surrounded by high fences and security guards.

We are now in the new part of the Orriols neighbourhood and we can do nothing but regret this unfortunate urban model, so different from both the traditional and the modern city; it is a model that negates the value of the street as a meeting place and that has surfaced during the years of the building boom.

Just before coming upon the much-loved stadium ESTADIO CIUTAT DE VALENCIA –which belongs to LEVANTE UD. and was designed by the great Valencian architect Juan José Estellés, but is today hidden behind a shopping centre – we arrive at the high school IES RASCANYA-ANTONIO CAÑUELO, a work by J. M. Barrera, recently finished.

We pass the high school on the Ronda Nord side (Ronda Nord is the new traffic bypass of Valencia) and come upon the multipurpose building CENTRO MULTIUSOS DE BENIMACLET, by M. Cerdá and J. Asensi. It houses several of the services required by Benimaclet. Beside the northern entrance to this building, an old Gingko Biloba tree has been planted. From here we return towards our starting point along Emilio Baró Street in the direction of Valencia.

Just before a famous horchata (tiger nut milk drink) parlour (horchatería), we find the site where Benimaclet residents continue to demand the construction of a new health centre. It has been promised but seems to be postponed forever. An official sign is the silent witness to this situation.

A few blocks further on we find the so-called potato warehouse, LA PATATERA, which used to be the Pachá discotheque and later the Arena Auditorium. Today it is abandoned, but another of the struggles waged by the people of Benimaclet is to have it turned into a social and/or cultural centre for the neighbourhood.

We come back to where we started, Torreta de Miramar Street, from where we can return to the centre of the Benimaclet, reflecting on the vicissitudes of this struggle-filled route.