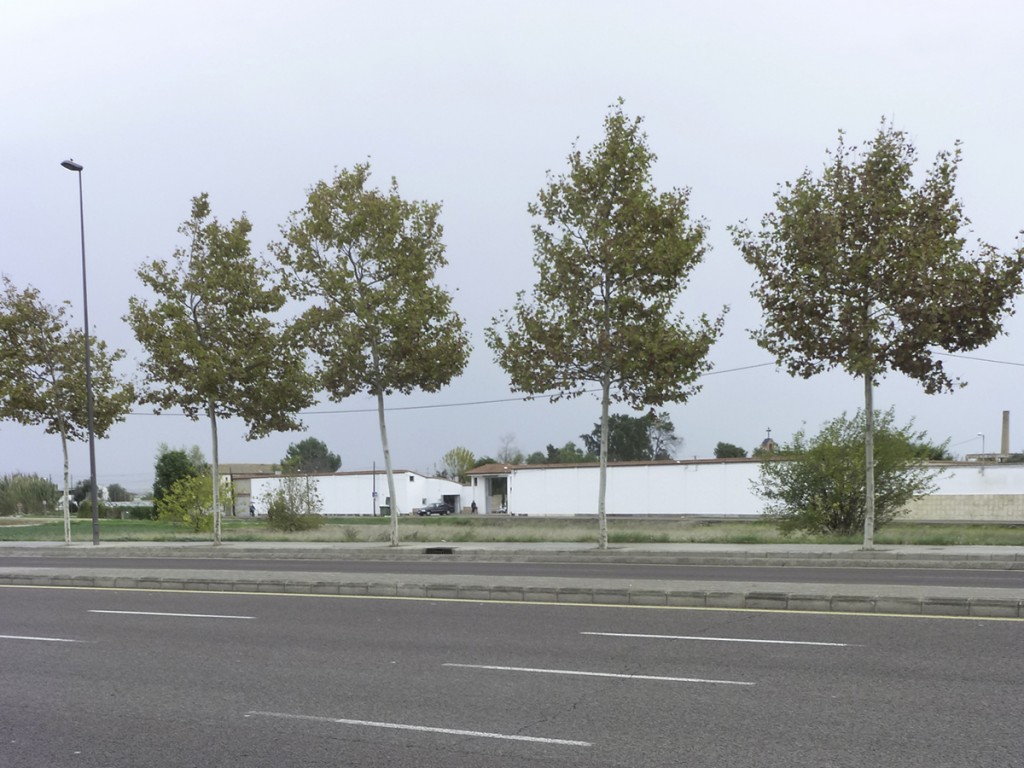 For almost two centuries, when the hamlet of Benimaclet belonged to the main parish of San Esteban, its residents had a cemetery of their own in central Valencia, in what is today the Bonaire Street. This cemetery was known as the Benimaclet Graveyard (Fosar de Benimaclet).

The dead were taken there by cart or carried on shoulders. There was a set itinerary along the old Benimaclet road (Camino Viejo de Benimaclet), entering the city by way of the bridge Puente del Real, and on the other side the procession would continue across the open space called Preachers´ Square, on to the Xufa Street, where the graveyard was situated. The other streets around it were Congregación Xaboners and Altar de San Vicente. Today, these streets have new names: Bonaire, Conde Montornés, Mar, etc.

When the new parish of Benimaclet got its own cemetery, the graveyard was donated to the parish of Santo Tomás.

The new cemetery was built near the parish church, in what today are the Nuestra Señora de la Asunción and Barón de San Petrillo streets.

The Cup of Saints was the usual burying place for members of the Brotherhood of the Saints of the Stone (Cofradía de los Santos de la Piedra) and their families. Persons who did not belong to the Brotherhood could also be buried there, but only, of course, after payment of a certain amount of money.

Another place was the Cup of Souls. This was where all those who had nothing to do with the Brotherhood were buried. The burial was authorized by the civil authorities of the moment. There were cases like the one described by one parish priest: “He was buried thanks to the love of God, because he had nothing at all.”

Deceased persons were brought to this cemetery also from Alboraya and Ruzafa, which is a sign that Benimaclet was attractive for all devout farmers of the surroundings of Valencia. This may have been the reason for the number of deaths and burials in the parish being high, even though in reality they were not that numerous.

The expression “cup” (vaso) seems strange to us. The word means cavity or hole and was used for old cemeteries. Its use may also come from the custom of the cup of tears. This was a small container that was placed by the crypts or tombs to gather the tears shed by the relatives or friends of the deceased.

Even though royal laws had been promulgated many years earlier to banish all parish cemeteries from the cities, it was only with the cholera epidemic of 1880 that the cemeteries were effectively moved outside the cities.

In order to comply with these norms, the parish bought land in the Vera area. This land belonged to José Francisco Ciurana Ferrandis, also known as Pepe Franco. His grandson José María Ciurana is the one who tells us about these things. The size of the land was six hanegadas. Each hanegada cost 150 pesetas. Francisco Català was in charge of initiating the move. Today it is the small part of our cemetery that we call “the old one” (“Viejo”).

Many parishioners contributed to the construction of the cemetery, carrying stones and other materials from the quarry of Burjasot. We still know the names of some of them: Chispa, Pepe Franco, Andreuet de Benlliure, Talpo, Cafis, Luis de Plaça, etc. This happened in the final years of the 19th century (1896-99).

Miguel Zaragoza Barber, who was the parish priest at the time, was in charge of the enlargement, known as Ensanche. We cannot give the precise date, because the cemetery grew little by little as needed. We do know that the first burials in the new part were in 1925.

During the civil war, the Socialist Committee of the village took charge of the cemetery, since it belonged to the parish. They desecrated the graves of the Salesian Fathers and that of the parish priest Francisco Català y Boscà. We should also mention Santiago Elrione, appreciated vicar of San Antonio Abad of Sagunto Street, who used to be a fellow student of San Juan de Bosco.

From then on and until the end of the conflict, all burials were civil and no catholic symbols were allowed.

With the land acquired for the cemetery in 1960 by Mr Sebastián Zaragoza, a new sector was added to the original area. Because of the freeway and its needs, this land cannot be used in its entirety. There is a triangle with a surface of 272 meters on which nothing can be built.

The Auxiliary Bishop sanctified this sector in 1961.

As the population grew, the need for burials in Benimaclet increased, so an effort was made to supply the cemetery with one more sector.

In order to do this, little by little between 1973 and 1986, the Cemetery Administration bought plots of land from various owners. Juan Luis Orquín, parish priest at the time, was in charge of this. He also took on the responsibility for a long pending step, namely the building of a small but modern chapel for the beautification of the cemetery. It is now an appropriate space for the multitudinous celebrations of All Saints Day.

It is the task of all parish priests to improve our cemetery. The present parish priest, José Antonio Varela, is working, among other things, on the construction of the Clergy Pavilion, a new niche pavilion and the entrance.

Note: A hanegada or fanegada is an agricultural area measure that varies between regions. In Valencia one hanegada is 831 square meters.

The Multipurpose Centre
Scroll to top