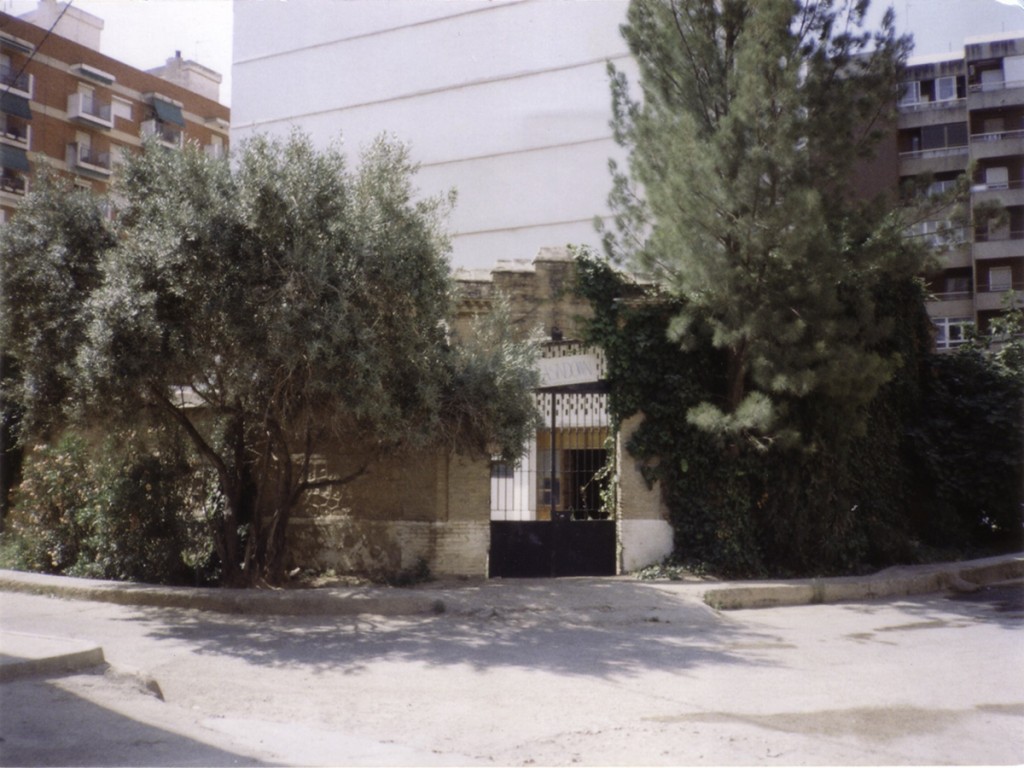 The slaughterhouse used to stand by the old road Camino de Farinós (part of which no longer exists), more exactly between the San Columbano, Masquefa and Valladolid streets.

We have been able to find out that, in order to construct this building, it was necessary to expropriate the land on which it stood. In the historical archive of Valencia one can find the whole bureaucratic documentation in the form of letters, as was the custom of the times. The land was expropriated from Vicente Giner for the amount of 1400 pesetas in 1926. “The half hanegada (old land measure) of this land that must be acquired for the construction of the Slaughterhouse is that of the North East corner, and its limits are therefore: North and West the Rambla road, South and East the land belonging to Don Vicente Giner Ciurana.” (Archivo Histórico de Valencia). The tenant farmer who worked the land, Manuel Belenguer, was also compensated with 165 pesetas.

The slaughterhouse was finished in 1927. But according to documents in the archive, it had still not been opened to the public in 1930. So the locals decided to write a letter to City Hall.

“Several inhabitants of Benimaclet ask that the Slaughterhouse of this village be opened to the public.

The residents of the village of Benimaclet who sign this letter to Your Excellency courteously declare:

That in the year 1927 the construction of the new slaughterhouse of this village was finished, and since at the present date it is still not offering the service corresponding to the establishment, because the opening of it has not been processed.

We plead that Your Excellency may find it right, after legal procedure, to proceed to its opening, since it already fulfils the required hygienic conditions and since drinking water facilities have also already been installed inside the mentioned establishment.

Another matter is that, at this time, the throats of cattle -the meat of which is sold to the public in the meat stores- are slit in the homes of the cutters, and since this is forbidden according to the Rules of Health, we ask that this petition be listened to so that the official opening previously mentioned may be effected as soon as possible, since in that way the quoted Rules will be complied with, the clandestine slitting of cattle throats will be avoided and the mentioned village will obtain this highly important service, that would enable the inhabitants to wholly trust the healthy state of the meat sold. This is the favour we hope to merit from Your Excellency, whose health may God guard for many years.” (Our translation, with an effort to imitate the old-fashioned language and its mixture of bureaucratic formula and everyday words.)

The documents that follow refer to the construction of a house for the slaughterhouse caretaker in 1932, so we can suppose that by that date it had been opened to the public.

In other words, the caretaker lived on the premises. Villagers remember that his daughter “was very pretty and sang very well.” A butcher worked there, and the veterinarian was also supposed to come in order to certify the death of an animal. It was not a daily event, since small animals were killed at the farms and only cattle were taken to the slaughterhouse, and since Benimaclet was an agricultural village, not very many families had cattle to kill.
The Municipal Slaughterhouse of Benimaclet, belonging to the City Hall of Valencia, continued working until the end of the 1970s. Even after it had stopped functioning as a slaughterhouse, the municipal employee, who worked as guard and caretaker of the bilding, lived there with his family.

One resident tells us about the times when it was no longer a slaughterhouse and lay partly in ruins: “The boldest among us kids used to go there from the village, looking for adventures, and often the caretaker, who took his mission very seriously, came out to shoo us away.” At the time when the slaughterhouse stopped functioning as such, the surrounding area was not yet urbanized. So we can say that it was situated in the middle of the farmland at the outskirts of the northern part of the barrio.

Around the mid 1980s the use of the building was temporarily given to an association dedicated to the aid and rehabilitation of drug addicts. “El Patriarca” was the name of the association. The patients, who lived in the building, cleaned and repaired it.

After a few years, this association left the premises, which were then occupied by the association ASINDOWN, whose purpose was to care for persons with Down´s Syndrome.

At the beginning of the 21st century, the building was torn down and on one part of the land, where it had stood, an apartment building was erected. Thus disappeared another sign of identity for several generations of Benimaclet residents, and the opportunity to convert it into a Youth and Culture House was lost. That had been one demand made by the neighbourhood association during the 1980s.