Today the road has disappeared due to the urbanization towards the end of the past century, to the development plan PAI Benimaclet Este and, later, to the construction of the through street Ronda Norte.

As its name indicates, it used to be a place with lots of springs and wells. It seems that these springs and wells were caused by the water from the irrigation canals along the left bank of the river Turia. The water in the ground under the square of Benimaclet was so abundant that it created a sort of pond, used by women to wash clothes, and at the spot where there is today a municipal social service center (Centro Muncipal de Servicios Sociales) there was a mill that used the stream of water for energy (inside the building we can see the grinding stone from that mill).

It may actually be that remnants of those streams are still there. When a sewage system and waste water pipes were put in, in 2008-2009, in the eastern part of Benimaclet, the construction had to be interrupted at the intersection of the Maestro Buenaventura Pascual and Murta streets, where a major lode of water was discovered. 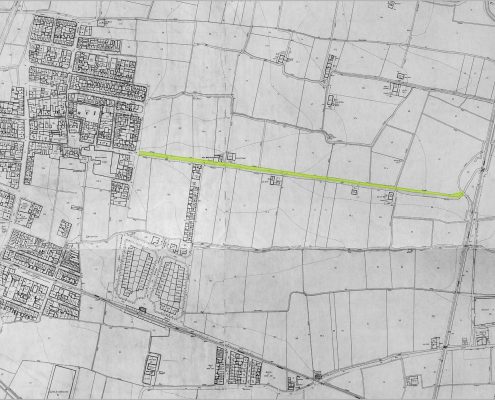 On the other side of the “vía churra” (the railway line between Valencia and Aragón), there is a narrow path that will take us to “Alquería Serra”, “Alquería Sales” and “Alquería Mos de Burro”.

The road continues and passes in front of the entrance to the parish cemetery until joining Camino de Vera, near “Casa Chispa” and the no longer existing “Barraqueta de Andreuet, el Atandaor”, where it ended.