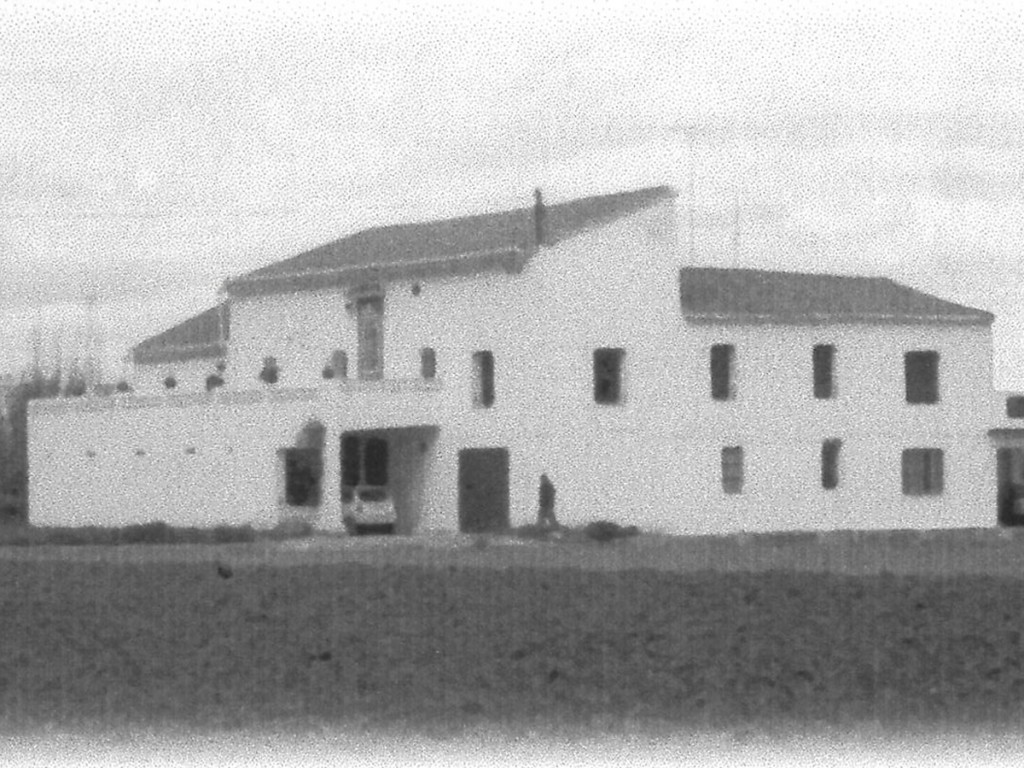 To be able to reconstruct the history of this farmhouse, we had the priceless help of the Giner family, who were the last inhabitants of it.

We could say that until the late 1990´s, this farmhouse was located in the midst of tilled ground. However, because of urban development, all the cultivated land and all the paths and roads have disappeared, and the old farmhouse is now located in Valladolid avenue, surrounded by tall modern buildings. Even though there are no documents to date it, it is believed that it is from the 18th century or possibly earlier.

Apparently, the Sanchis Sales family and their descendants lived in this farmhouse during the 19th and early 20th century. People say that at some earlier point in time it had been sold or donated to some nuns. In 1960, the Giner Sánchez family bought it from A. Greses Rubio who bought it from L. Almenar Soler, who inherited it from C. Almenar Soler in 1953.

The property consisted of a house, a poultry house and a kitchen garden. Until 1964 the floor plan of the farmhouse was shaped like a U and had three stairways to the first floor. The Giner family told us that there is a legend about this house according to which there was a hidden treasure under the stairs. The backyard opened to the irrigation ditch of Rascanya and there were two poultry houses on the top.

The Giner father used the garden land belonging to the farmhouse for growing food for the family. In all of the huerta (orchard area) of Benimaclet and generally of the whole rural area north of the city, there were two or three harvests per year. The farmers used to plant potatoes, chufas (tigernuts), onions, peanuts and tobacco among other things, depending on the season. This farm also had animals throughout the time the family lived there: pigs, horses, bulls, ponies, rabbits, chickens, turkeys… they even had a hare named Antonia as a pet, apart from the dogs and cats that every house of the huerta used to have.

At that time the doors of the farmhouse used to be left open. Children were able to grow and play freely. One of the daughters remembers with a smile how once she was caught while she was hiding, eating a tomato among the tomato plants. Another daughter tells us that: “With three terraces and a big room, there was no need to leave the place.” When March came around: “We would make fallas with cardboards and old stuff and we would ask the farm workers for money to buy firecrackers,” they remember laughing. In this farm, gatherings of family and workers were frequent. To sit on the porch to cut potatoes to plant was usual during the month of December. For Easter, other families, children and friends would come to celebrate together.

Between 1964 and 1966 the farmhouse was refurbished: the yard was roofed, the floors lifted, etc. After this reform, the ground floor was used for farm tools and also as a garage, warehouse and stables, except for one room that was used as an office with an exit to the back porch. Almost the whole first floor was used as a dwelling and the rest as a barn where the season’s harvest was stored and where tobacco and tigernuts were dried. On top of the home, there was another floor used as an attic. In 1976 one of the four terraces was roofed.

In the mid 1980´s, the building was declared “Asset of Artistic and Historic Interest” (now called Heritage of Cultural Interest); however, we have only found the document that refers to the ceramic image of the Virgen de la Inmaculada Concepción (Virgin of the Immaculate Conception), declared as a Locally Relevant Asset. In the mid nineties, as agriculture declined, parts of the stables were rented to a gardening business.

In the final version of the PGOU (Plan General de Ordenación Urbana/General Urban Development Plan), approved in 1988, luckily this lovely farmhouse was catalogued as a protected building, thus being saved from destruction and disappearance once the PAI (Plan de Actuación Integral/ Integrated Action Plan) of Orriols got under way. This plan was approved in the municipal plenary of 28-2-1997 for an area of 500.000 m2 where 3.355 homes could be built. The Neighbourhood Association of Benimaclet (A.VV) was constantly on the alert to make sure that the PGOU protection would be upheld.

The PAI of Orriols had consequences for the northern part of Benimaclet because of the restructuring of the plots that would be used for other than agricultural purposes. The father of the Giner family met with other farmers who were also affected by this program. All of them were offered an economic compensation for their houses and land but not in proportion to the benefits that would be obtained from that land. So an attempt was made to create a united front to ensure that all would benefit equally, but most of the people accepted the offer and left. Some of them became promoters, as they kept part of the flats that were built on their properties.

The Giner family did not accept the forced sale of their farm for the ridiculous price that they were offered; instead they decided to fight legally, first to stay in the house and later not to be expropriated. For this reason, they decided to wait for the court to decide before accepting the money that Espacios del norte (Northern Spaces), the promoter company of the PAI, had deposited for them in a public account.

But, due to the information provided by the City Council of Valencia to the A.VV (asserting that the Giner family had received an economic compensation eight times as high as the real amount) and the pressure exerted, through the mass media and other actions, in December 2001 the family was evicted by means of a forced reparcelling procedure. Both the family and the gardening company that had rented the ground floor had to leave within a week and find another place to live and a place to store all their belongings. Christmas was coming and the father of the family suffered from Alzheimer’s disease. But none of this helped; they were forced to move immediately to a rented house.

In 2002, once the PAI was almost finished, the A.VV requested from the City Council, and specifically from the Social Welfare Service, that this farmhouse become a day centre for the elderly, a necessary service that was not provided in Benimaclet. The application was approved, and the building was put temporarily in the hands of the Department of Employment, which was to arrange for it to be reconditioned within two years by a training workshop. In 2004 the building should have been transferred to the Social Welfare Service, which would then have installed all the necessary equipment in order to inaugurate the day centre that same year.

However, from 2004 until the beginning of 2010, nothing at all was done, and during this period the building façade and windows suffered damage, so a budget of 30.000 € had to be assigned for repairs. At the end of 2009 and after a visit on the work site, the A.VV learned that the training workshop had done next to nothing, so a new phase of rehabilitation of the farmhouse had to go out to public tender. The work started in early 2010 and was finished in the autumn of the same year, but even so the building remained closed for another year.

Thus, unfortunately, after the Giner family had been urgently evicted, the farmhouse was closed for eleven years. It did not open as a day centre until February 2012.

During all this time, the A.VV had a lot of meetings with different councillors and organized various demonstrations, collections of signatures, etc. Thanks to this, today Benimaclet can offer this important service for the elderly.