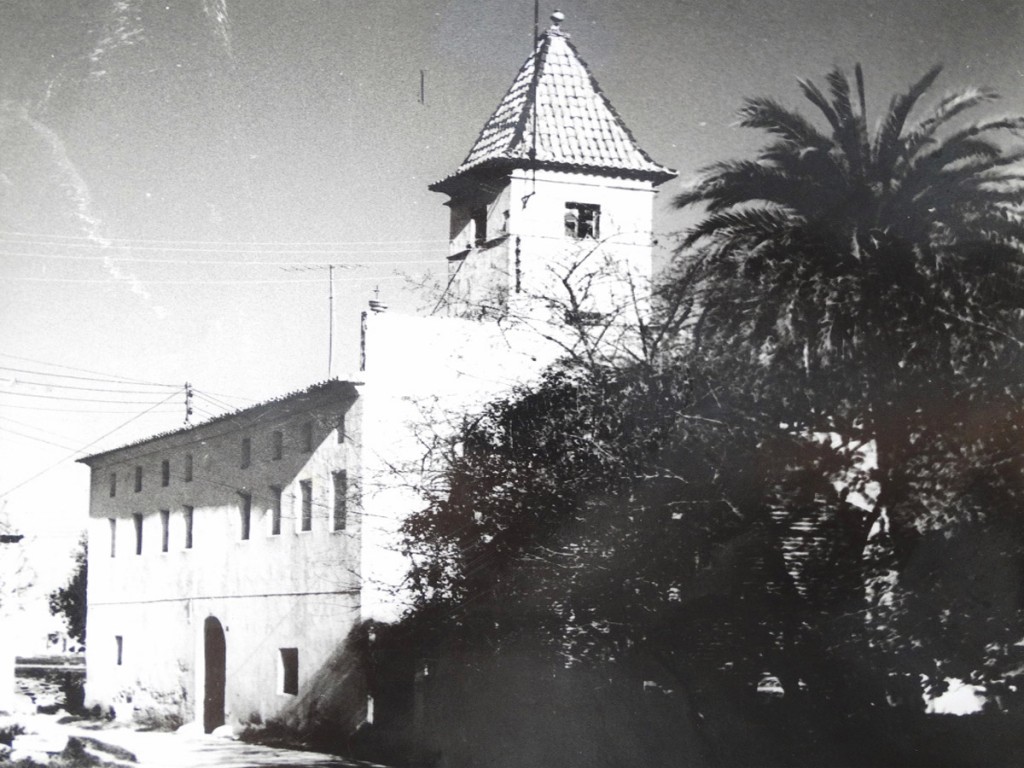 The writer and intellectual Francisco Almela i Vives left evidence of this farmhouse in his book Alquerías de la Huerta Valenciana (1932) (Farmhouses in the Valencian Orchard). He wrote that it was situated “in the old Farinós road, number 7. It is called Miramar (sea view) because of the slender and square tower that emerges from the two- sided roof; this tower is finished off with a pointed tiled spire with coloured edges; on each side there are two superimposed windows. This farmhouse is quite simple with an arch door and two rows of eight windows each on the main façade. The most remarkable thing about it is the adaptation that has been made on the east side, converting it into a typical eighteenth century façade with its clay acroterium, with its wooden lacework lookout, with a staircase and with a fence surrounding a garden full of palm trees and eucalyptus. It is a curious transformation, over the centuries, of the coexistence in the same building of farmers and landowners”.

Teresa, the daughter of the last person who lived there, Jose Antonio Medina, tells us what it was like to live in this house, which looked like a small palace. Thanks to her, we have been able to reconstruct a part of the history of this now lost building. As Almenar y Vives wrote, it had a tower from where you could see the sea really well, and that was the reason for its name. Teresa says, however, that it was situated on the other side of New Alboraya Road (the present Emilio Baró street) instead of in Farinós road. Teresa also remembers that it was one of the few constructions of the area and that the situation was privileged, surrounded by orchards: “It was a small place with old buildings. Quite close to the house there was a mill, on top of an irrigation ditch, with an arch and a small bridge that looked Roman.”

José rented the house from some upper class ladies that he met walking by the Alameda Park around 1930. At that time, the rent paid for a farmhouse like this one was quite small. It was a very large building where two families were living in different parts.

Teresa’s family entered through the main entrance and the caretakers through a side door. Both families were tenants. Inside the building the two parts were connected by a door. The caretaker family was in charge of taking care of the building and lived off of the land that belonged to it. The Laguarda Carsi family were the last inhabitants of this farmhouse. Apart from working the land, the caretaker’s sons also had silkworms as an economical complement, which was typical of Valencian agriculture at that time.

It was a very big house. The roof was made of Moorish tiles and finished with the tower. To climb the tower, there was a wooden spiral staircase. In the entrance there was also a staircase leading to several rooms. The floor of the building was made of bricks forming mosaics. On the top floor there were eleven rooms. The main room was situated above the entrance hall and had a big balcony crowned by canopies of Arab-style carved wood. The rounded entrance door had a big arch and inside the house there was another arch that divided the hall into two spaces. There was also a big yard with a kitchen, an Arabic well and a fireplace. Moreover, there was a Moorish oven where the bread and the sweets were baked. Up on the wall there was a shelf full of ancient dishes and ceramic pieces. As Teresa remembers it, towards the end the house needed repairs because it was very old. The date of construction is unknown, but it is clear that, even if its origin is not Arabic, it is a heritage from that culture.

The house had a lush garden with big palm trees, plane trees, fruit trees, etc. Every day there were painters there, trying to catch the beauty of the place on canvas. The owners would go there to spend the day and enjoy the quiet and calm.

Jose started up a poultry farm for his personal gain, and he also had other animals for private use. The owners of the property left this whole legacy to the Teresian nuns on the condition that they would rehabilitate it as a school. But, due to the fact that farming was considered an unpleasant business that caused bad smells, the nuns asked the pope for permission to sell the property and to use the money earned to build the promised school somewhere else.

While it is true that they could have removed the farm functions and left the building in place because of its value as heritage, sadly, what happened, just like with other symbols of Valencian culture, was something different.

In 1970, Jose and his family were notified that they were going to be evicted. Jose uttered a sentence that would be repeated in the history of Benimaclet: “No way, over my dead body!” The eviction was set for the 31st of March, and coincidentally two days before that, Jose died without seeing what the future held in store for his cherished home.

It did not take long before the building was demolished, since it soon suffered plunder and theft. Jose’s family received a scant economic compensation from the city council.

In this way, in 1971 Benimaclet lost a farmhouse that was unique in its beauty and singularity. Today, the street where it was situated has been named Torreta de Miramar in memory of its existence and the importance it had at the time.