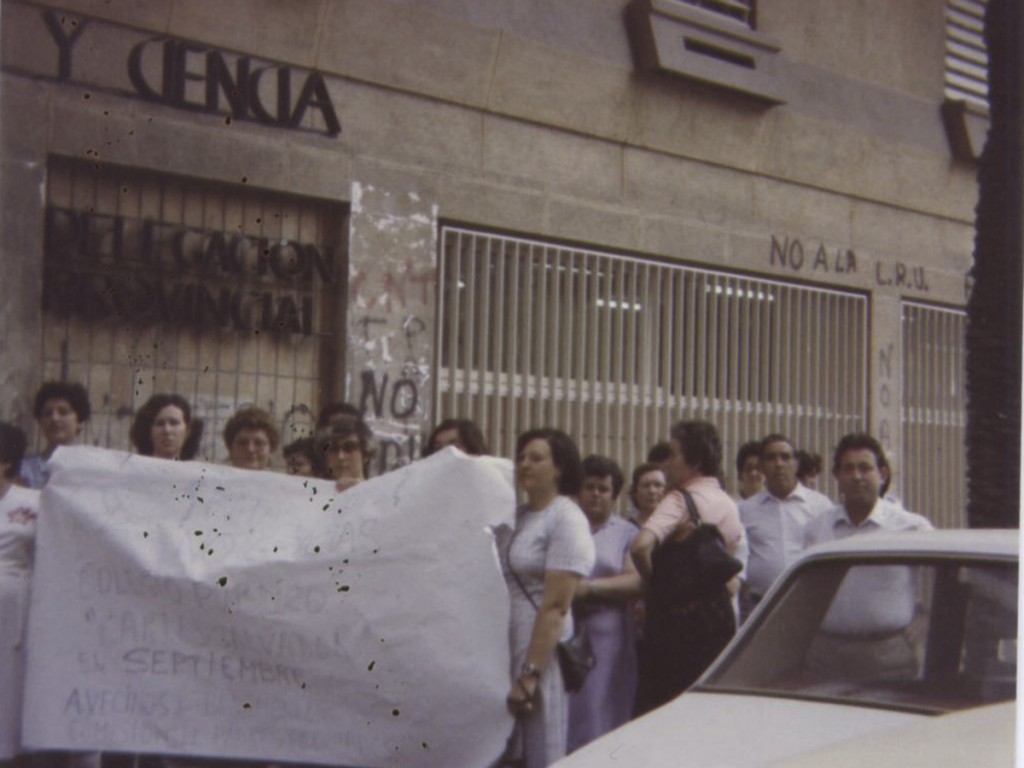 In the early 1970s, Benimaclet did not have a building that could function as a school for all ages. There was a municipal school, but it was spread out in various ground floor spaces, according to the age of the children. In Albocácer street there was a ground floor space for first grade students, in Emilio Baró there was another for those of second grade; third graders were also housed at Emilio Baró, where the wine shop Bodega Baltasar is today; fifth and sixth grade were taught in Hermanos Villalonga, and finally seventh and eighth grades in Hipólito Martínez.

There were two schools located between what is today Emilio Baró and Alfahuir (the latter did not yet exist). The Villarreal School had its classrooms in Dolores Marqués street and also at 25 Albocácer street, on the first floor. The office was in Benicarló street. The other school was the Tagore School, in Poeta Altet street, about where the Carles Salvador school now stands, but on the opposite side of the street. Neither of these two schools was public.

Many children also went to the San Fernando School, in Alboraya street, in the place called Los Arcos (the Arches). Other students from this area went to the Salesiano school, which was also private.

This area was populated to a large degree by immigrants who arrived in the 1960s, mainly from the provinces of Cuenca and Albacete. So they felt different from the rest of Benimaclet. One sign of this is that they had their own parish, the parish of San Lorenzo, located in Albocácer street, on the ground floor of an apartment building.

The Municipal School, in Hermanos Villalonga street, was the first building with a school feeling to it. But the children who lived on the other side of Emilio Baró had to walk across a lot of fields to get to it.

In the 1980s, people began to demand a public school for this area, so that parents who could not afford to, or did not want to, send their children to a private school would have a free option and the students would not to have to change building each time they moved up a grade.

The Padre Català School had been built two years earlier, but it was meant for the children of central Benimaclet. The Patronato school had also opened its doors around 1980, but it, too, was a private school although state subsidized.

The Neighbourhood Association demanded a public school – one financed by the state, not the municipality – and it managed to find land for a school with a yard. The parents of the area initiated and supported this struggle along with the Neighbourhood Association. In February 1982, actions were begun in order to obtain a new school in the lot in Poeta Altet street, a lot that was marked for educational purposes in the urban plan. On November 15, 1982, a petition was submitted for the future school to be named after Carles Salvador. The result was positive, since in the end the school was indeed built.

The building was finished in April, 1985. The school started out with a few public employees in charge of registering students. Then the first school year began in September, 1985.

To begin with, only lower grade education was offered. When the law made it a requirement to offer pre-school education, too, a pre-school department was opened in the teachers´ parking lot. During the first school year, there were much too many students. People made great efforts to register, even changing their addresses in order to get a place in school for their children. Later, little by little and as the immigration of foreigners increased, the pressure decreased, due in part to the unwillingness of many parents to have their children study together with immigrants. To fight against this problem, there were efforts to change the image of the school in the barrio. Among other things, a line in Valencian was opened in 2001. This caused some conflict among the teachers, since many did not want this, but one part of the parents´ association insisted.

From the late 1980s up until 2005, this school suffered from a bad image, but today it is considered a model school. Parents who enroll their children there do it because they belive in public education and in a medium sized school with a warm atmosphere. It is about to become a school with inclusive education and it is also a leader when it comes to new technologies.

The current principal of the school, Vicenta Guijarro, also known as “Vitxi,” is the first principal with roots in the barrio, since she was born in Villarreal street. Her office carries out evaluation polls among parents and students. The parents´ association participates in this. The idea is to promote self-management and self-evaluation while trying to harmonize family values with school values.

The Ferrer i Guàrdia High School