The Ferrer i Guàrdia High School 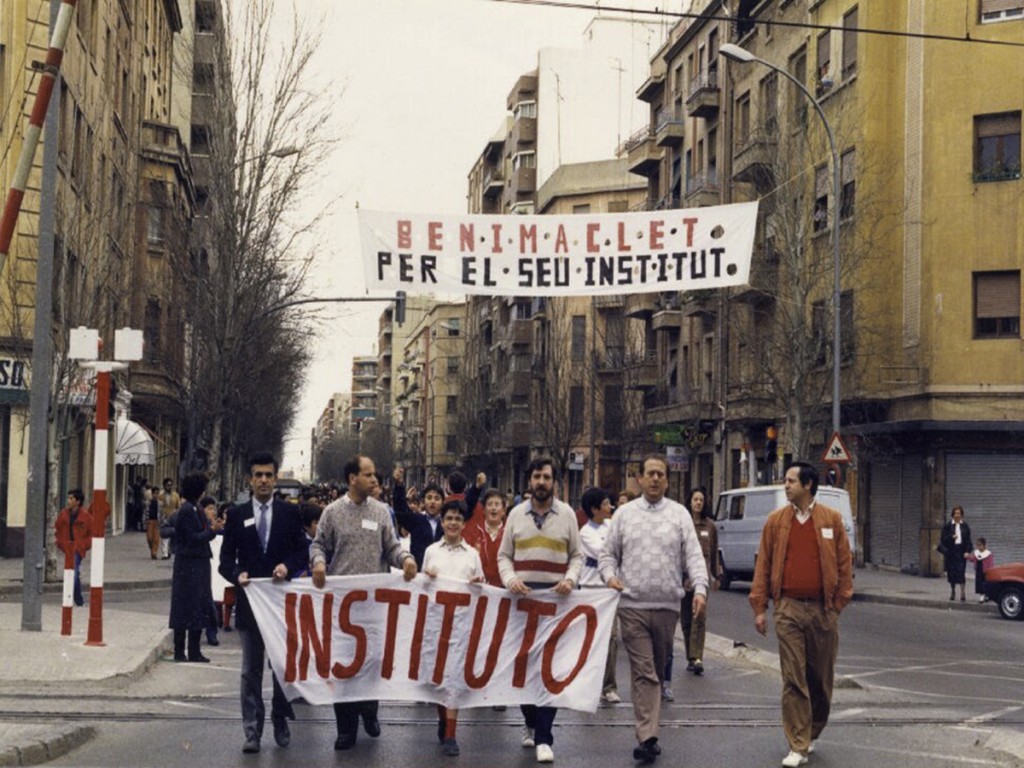 From the 1950s on, Benimaclet experienced intense urban growth for a number of reasons. But around the mid 1980s it was still lacking a high school of its own.

The closest ones were Benlliure, in Alboraia street, and Isabel de Villena, by the Arenas beach. Later Ramón Llull was built in the barrio of San José. But these high schools were already overflowing with students, so it was urgent to build a new one in the Benimaclet area.

In order to work for this, a coordinating committee, the Coordinadora Pro-Instituto, was formed in Benimaclet. It consisted of the parents´ associations of Benlliure and Ramón Llull high schools, along with those of the public schools Padre Català, Carles Salvador, Municipal, the pre-school “Bressol”, the state subsidized private school Claret and the Neighbourhood Association of Benimaclet.

The General Urban Development Plan of Valencia had not yet been approved, but there were several Partial Plans in which the uses of urban space were specified. In the Partial Plan for southeastern Benimaclet, the quarter called Santa Ana was supposed to disappear in order for that plot of land to be used for a school. Santa Ana was an old working class quarter consisting of about a dozen houses.

The coordinating committee chose this piece of land to demand the construction of the high school. In early spring 1987 there was a big demonstration, with more than a thousand persons marching through the barrio to the area.

After many meetings with municipal and regional administrations, along with sit-ins, collection of signatures and demonstrations, most of the bureaucratic obstacles that kept popping up were overcome. Among them the fact that another small lot had to be expropriated in order for the total to reach the 10.000 m2 that were required at the time; another one was the need to change the course of the Mestalla irrigation canal; and more…

It was not until the school year 1991–1992 that the much needed high school could open its doors. Before the inauguration, the coordinating committee proposed that the new high school be named after the great libertarian educator of the 19th century Francesc Ferrer i Guàrdia.