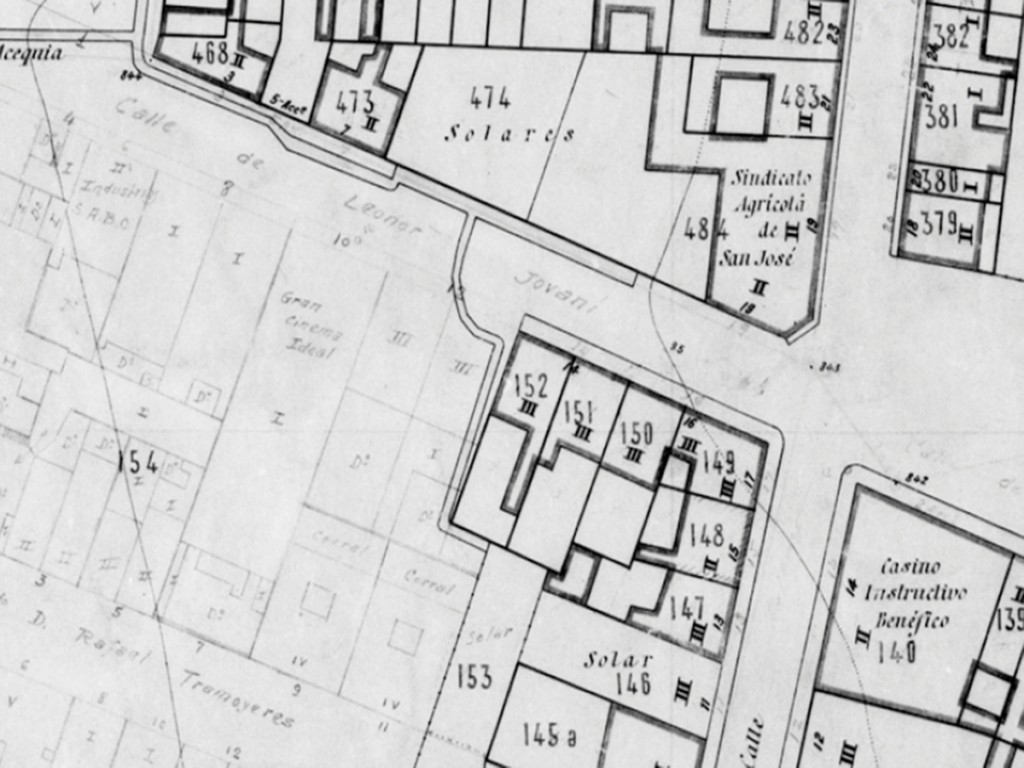 The “IDEAL” cinema, popularly known as Meló Cinema, was situated in number 10 Leonor Jovani Street, although it had previously been in Greses street. It was a classic village cinema, typical of the mid-twentieth century. It was what was called a re-release cinema, as they showed films previously released in better cinemas.

There were seats on the ground floor and one upper storey. The tickets for ground floor seats were more expensive as they were more comfortable; wealthy people used to sit there. Upstairs, on the balcony, vulgarly known as “gallinero” (henhouse), was the place for children and for many couples who used the darkness to kiss each other. People used to throw down food leftovers or peels from the balcony, which sometimes led to arguments. Around 1950-1960, the price for a ticket was around 4-5 pesetas.

It was popularly known as Melon cinema because people used to come to the late sessions with a sandwich and fruit in order to have their dinner while watching the film. People say that, from the gallinero, melon peels and other rubbish were thrown down. So you could eat and drink inside, but nothing was sold there. People used to buy chewing gum, sweets, pipas (sunflower seeds), liquorice, etc. before entering, to consume during the film.

In the beginning of 1970 the cinema closed down and was transformed into Mavis Disco. At that time, this kind of dance halls proliferated. In fact, all villages and districts had at least one disco.

The Mavis was not specialized in live shows, but even so there were some occasionally. Neighbours remember the performances of Camilo Sesto, Al Bano, Bruno Lomas and others.

The discotheque fever disappeared as suddenly as it had appeared. Instead, when gambling was legalized, the bingo club fever started, and Mavis became a bingo hall in the early eighties. This activity lasted just a few years and, at the end of the eighties the place became a dance hall.

At this time, a controversy emerged due to the fact that permission was given for a nazi music band to play there. The absolute rejection from the locals made the owners reconsider and cancel the concert. People remember that at the beginning of the 90’s this dance hall closed down.