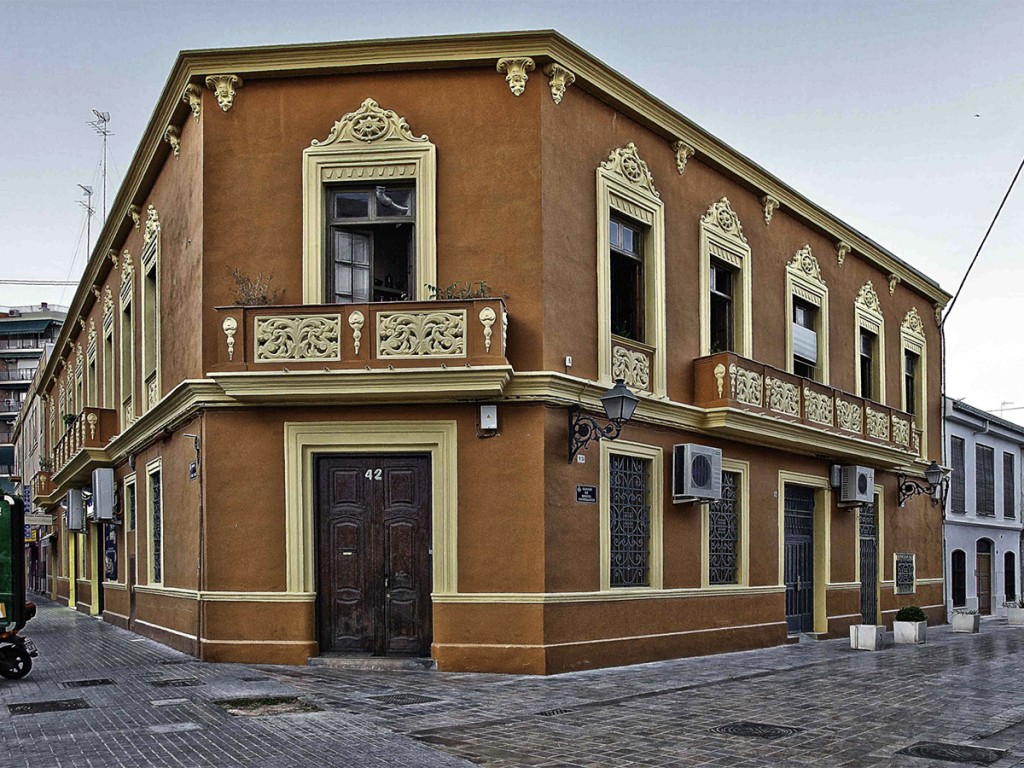 This society, known in Benimaclet as the Cooperative (La Cooperativa), was founded between the years 1910 and 1912 by a group of men who lived in Benimaclet. The majority were industrial workers or farmers.

The oldest document available is the Statutes of the Cooperative Workers´ Society “Benimaclet Savings” (Reglamento de la Sociedad Cooperativa Obrera “El Ahorro de Benimaclet”) from June 16, 1911. In order to recover information about this cooperative, a few of its present members had a conversation with José Buch Sanchis, the oldest person in Benimaclet (he is 101 years old at the moment). Due to his age and his clear mind, he was able to help reconstruct the history.

Between 1909 and 1911, before the Cooperative was founded, some eight or ten men used to bring goods from the house of tío Monserrat, near Murta Street; to the ground floor space they had rented at 2 Manuel Castellano Street. In 1911 they decided to form a cooperative in order to formalize these activities. The purpose was to obtain better prices for the members. Each member paid an annual amount. In 1914, the Cooperative bought the lots at 42 Emilio Baró and began constructing its present building. It was finished between 1918 and 1920.

In the early days, the shop was open only on Saturday afternoons, since the village was still small; there were houses only between the square, Masquefa Street, Asunción de Nuestra Señora streets, Cristo de la Providencia Street and Valencia Street (today Barón de San Petrillo). To prepare the goods, sold in paper bags, the members came un during the week to do “fatigas”, turns of two or three hours, until ten o´clock at night.
On the ground floor of the new building, space was arranged for an oven for baking bread. The rest of the ground floor was used as a warehouse and a shop where the members could buy goods. On the first floor, a small apartment was built for the baker, and in the remaining space Rafael Amo taught drawing and plaster works for free to the children of members.

In 1927 a group of members formed a housing cooperative to build the Barrio of the Cooperative, very few houses of which remain today.

In 1940 the Town Hall of Valencia rented the first floor and remade it into a pre-school and elementary school for boys. It was named Cardenal Reig and its first head was José Alcover. The teacher, writer and poet Carles Salvador taught in this school and was also later its head. Buenaventura Pascual also taught there.

People called it the National School (Colegio Nacional), since the expression public school was not used in those times. It had four classrooms, and in each one there were some 40 or 50 pupils. According to the memories of former pupils, each Thursday they went as a group to the parish to pray. There were also singing classes, taught by Encarna.

There was no schoolyard, so the pupils spent all their school hours in the four classrooms. In the late 1960s and early 1970s there was a teacher, Rafael García Reyes, who on his own initiative took all his students for a walk every Wednesday afternoon. These excursions went mainly to the Malvarrosa beach, where the boys played soccer on the sand. Thanks to this teacher, the students got a bit of fresh air at least one afternoon a week.

The Cardenal Reig School operated until 1980, when the rental contract with Town Hall was discontinued. One reason for its closure may have been that a few ground floor classrooms were built in the Músico Hipólito Martínez and Marcelino Giner streets. In the building there is now an Association of Experimental Image, which rents the whole floor from the Cooperative. On the ground floor the cooperative shop La Prosperidad still operates.

In 1956 a housing cooperative, “La Prosperidad,” section B, was formed in Benimaclet for the purpose of building two units of housing for the members. The construction was begun in 1960 in the Maestro Buenaventura Pascual and Carmen Crespo streets. Manuel Castellano Street was the last one going towards Alboraya. Reverendo José Martí, Virgen de los Desamparados and Leonor Jovaní streets did not join the Alboraya road (today Emilio Baró). This meant that to go to the cooperative area one had to walk along a path from the Tramoyeres cabins on Valencia Street.

In 1974 the shop and warehouse space was reformed and made smaller. For this reason the Cooperative made a donation to the Ethnological Museum of Valencia, for it to conserve and show the following objects: scales for weighing grain with three weights, five small shovels for grain, one measure for oil, one container for spices, one carpenter´s square, one funnel for pouring wine, one plate and one palm leaf basket.

At the present time, the Cooperative continues operating as such. Since May 25, 1991, its president is Salvador Almenar Traver and its secretary Pascual Pastor Estors.