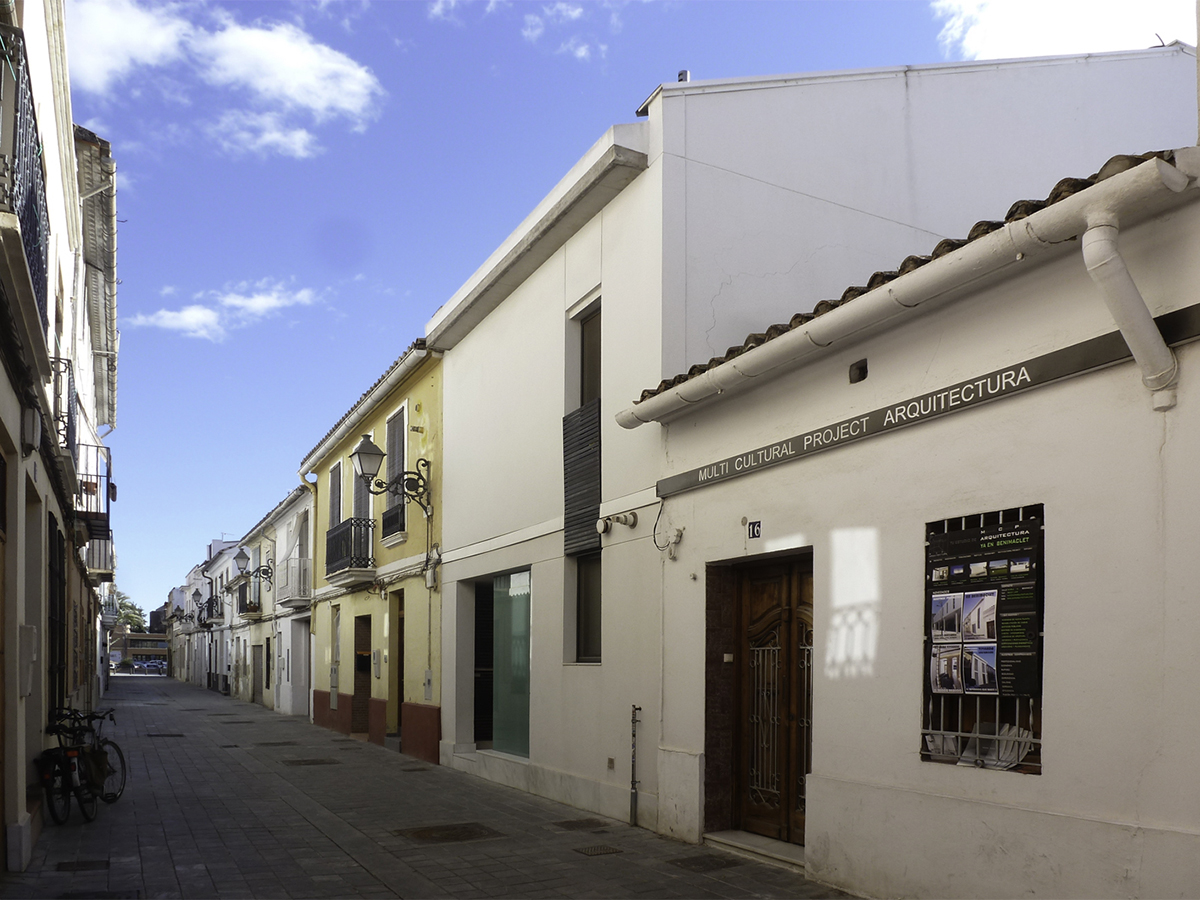 This building includes living quarters and an architectural study, built between 1999 and 2002. Its architect is Manuel Cerdá Pérez. It consists of a basement, two floors and an attic, with an inside yard. A staircase parallel to the front wall organizes all its spaces. It is a contemporary design that respects all the environmental values of the historical village that surrounds it but without any false mimicry. The living space is closed to the street and opens onto the inside yard that is oriented to the south, receiving sunlight all year round.

The realization is very simple and utilizes as few different materials as possible. There are four unique spaces, one for each floor. Noteworthy is the differentiated use of natural light that changes as you move through the interior from the basement to the attic.

The design is in addition energetically efficient and sustainable without the use any unnecessary technology, resting instead on the good practice accumulated through centuries of experience and wisdom in the Mediterranean culture and tradition. Through an intelligent use of air circulation, Majorcan shutters for protection from the sun, and the organization of space open to the best lighting, the house is energetically efficient by means of the architecture itself, as should always be the case.

The building is included in the Architectural Guide of Valencia, edited by the local architects´ association (Colegio Oficial de Arquitectos de la Comunidad Valenciana), and it has been the object of numerous publications in specialized journals of the sector, including also the shooting of an episode of the television program “S´estila” of the local channel Canal 9.

Worth mentioning is that in 2003 it was used as a set for the shooting of the film “Aquitania”, by the producer “Tridivisión” and directed by the Valencian film director Rafa Montesinos. The principal actors were Aida Folch, Joan Crosas and Jorge de Juan. The film was first shown at the Mediterranean Cinema Show (Mostra del Cinema del Mediterrani) that same year.

On the ground floor next door, in number 16, is the architectural study mentioned. It also functions as a cultural space (Multi Cultural Project Arquitectura), integrated into the network of cultural spaces of the barrio called “Benimaclet Entra.” It offers expositions, talks and monthly lectures, oriented to provide the barrio with alternative vivid cultural events.

In the words of the architect himself, the building was “baptized” in various ways by the neighbours who saw it grow. Seeing the simplicity of the front facade, they imagined a dental clinic, a physical education centre or even offices. But his favourite definition was the one a mother gave her daughter one day, as they looked at the facade: “Look, this is a house that is a thing that is not a house.” (“Mira, hija, esta casa es una cosa que no es una casa”.)

The Centre for Social Services
Scroll to top