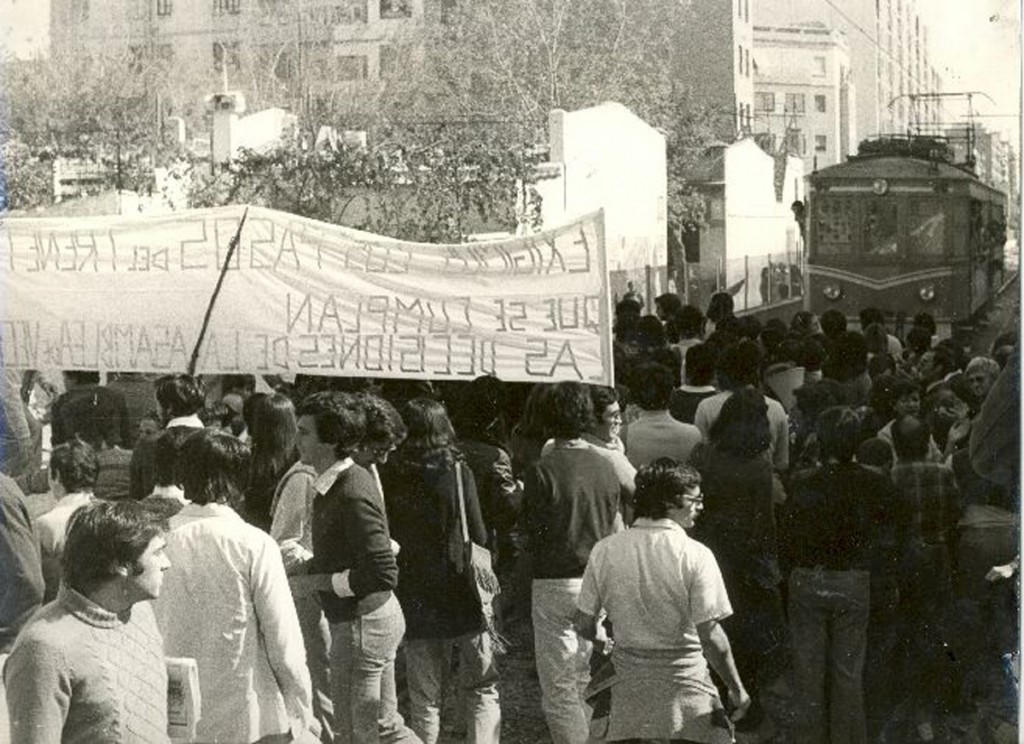 From the Pont de Fusta Station to El Grao (the port) ran a train line popularly known as “El Trenet”, the little train. It had been opened on July 7, 1892 and operated up through the 1980s, along a trajectory of 5.8 kilometres. In the earliest days, until 1898, it was run by the Sociedad Valenciana de Tranvías, and from then until 1917 by the Societé Lyonnaise “La Lionesa”. Between 1917 and 1964 it belonged to the Compañía de Tranvías y Ferrocarriles de Valencia (CTFV), and later, from 1964 to 1986, to the Ferrocarriles Españoles de Vía Estrecha (FEVE). And from 1986 until today to Ferrocarrils de la Generalitat Valenciana (FGV).

Initially the Trenet was only used for the transportation of goods. It was not until 1915 that it began transporting passengers.

The Trenet served the following stations: Pont de Fusta – the Benimaclet stop (el apeadero) – the Benimaclet station (“La Estacioneta”) – La Carrasca – La Cadena – Las Termas – Las Arenas – El Grao. This trajectory stayed the same from the beginning and was used by the residents of Benimaclet to go to the beaches of La Malvarrosa, Las Termas or Las Arenas, and also to go to the specialist medical centre of Alboraia street, which was very close to the Pont de Fusta.

But as the barrio grew in population and urban development, the tracks of the Trenet came to be a barrier that separated Benimaclet from the rest of the city, while also constituting an irritation and causing deaths in accidents. These tracks caused more accidents than any others in Valencia. In 1974, the inhabitants of Benimaclet began a campaign, in the form of demonstrations and sit-ins, to ask for security measures.

Seeing the numerous and vigorous protests, in February 1976 the City Hall of Valencia, under Mayor Ramón Izquierdo, had the disastrous idea to construct a high wall along both sides of the tracks in order to end the constant accidents. This wall was to be known for many years as the “wall of shame.”

The wall signified an even clearer material separation between Benimaclet and the rest of the city. It also meant bad communications for the barrio, since there was only one underpass for pedestrians, near Juan Giner street, apart from the street level passing for both vehicles and pedestrians at Barón de San Petrillo.

Nothing came of the promise to build new crossings for pedestrians on Poeta Altet and Dolores Marqués streets. On top of everything else, the wall did not solve any problems; accidents were not reduced in the least, since people constantly jumped over it in order to get from one side of the street to the other. So the protests and demonstrations organized by the Neighbourhood Association of Benimaclet continued.

Towards the mid 1980s, fatal accidents kept happening and social problems and dangers increased because drug addicts gathered in the underpass. Also, the tunnel flooded on rainy days. For all of these reasons, the protests and mobilizations increased and so did the number of people participating.

In April, 1988, the residents decided to stop the train traffic once a day in order to revitalize and give more force to the protests. In view of this, the manager of the FGV ordered the trains to reduce speed to 30 kilometres per hour when approaching the street level crossings. But it didn’t stop the problems, and in 1989 there were eight deaths in just one year.

The Assembly of Residents and the Neighbourhood Association demanded that the tracks be moved underground, but the regional office of public works (Consellería de Obras Públicas) considered that option too expensive and chose instead to convert the train line into a tram line. Demonstrations followed upon demonstrations. On April 19, 1989, fourteen Benimaclet residents were arrested by the State Police for no obvious reason, since they were just asking for information about what was going on. They did not break any law, they were not hindering traffic and they were on the sidewalk. In the end, the court filed the case against them, since they could not be accused of disturbing law and order, and the trial was cancelled. In October of that same year, a street level crossing was built at Dolores Marqués street.

The situation was untenable and the local protests ever growing. The Neighbourhood Association of Benimaclet organized a human chain for December 17, 1989. One day earlier, the former Mayor of Valencia, Clementina Ródenas, announced the cancellation of the train line between Pont de Fusta and El Grao. That meant that the wall and the train tracks would disappear from all the barrios served by the line and thus, and above all, the iron belt that choked Benimaclet. The planned human chain turned into a festive celebration. No special incidents were reported. Several residents began a symbolic chipping away at the wall, in anticipation of what was to come about. The last train left on January 31, 1990.

In spite of everything the Assembly of Residents and the Neighbourhood Associaton underlined that the barrio was against the tram line and the goal was to move the tracks underground, creating a line of underground transportation. They also emphasized that what had been obtained was “a victory for the neighborhood, not for the City Hall or the regional government.”

During 18 years of struggle, 87 persons suffered accidents on the tracks, 22 died, there were 15 suicides and 28 collisions with vehicles, according to FGV figures. Even though the goal of moving the tracks underground was not accomplished, the union and strength of the residents of Benimaclet achieved the end of the iron belt with all its deaths and constant accidents.

The Chocolate-Maker’s Store
Scroll to top