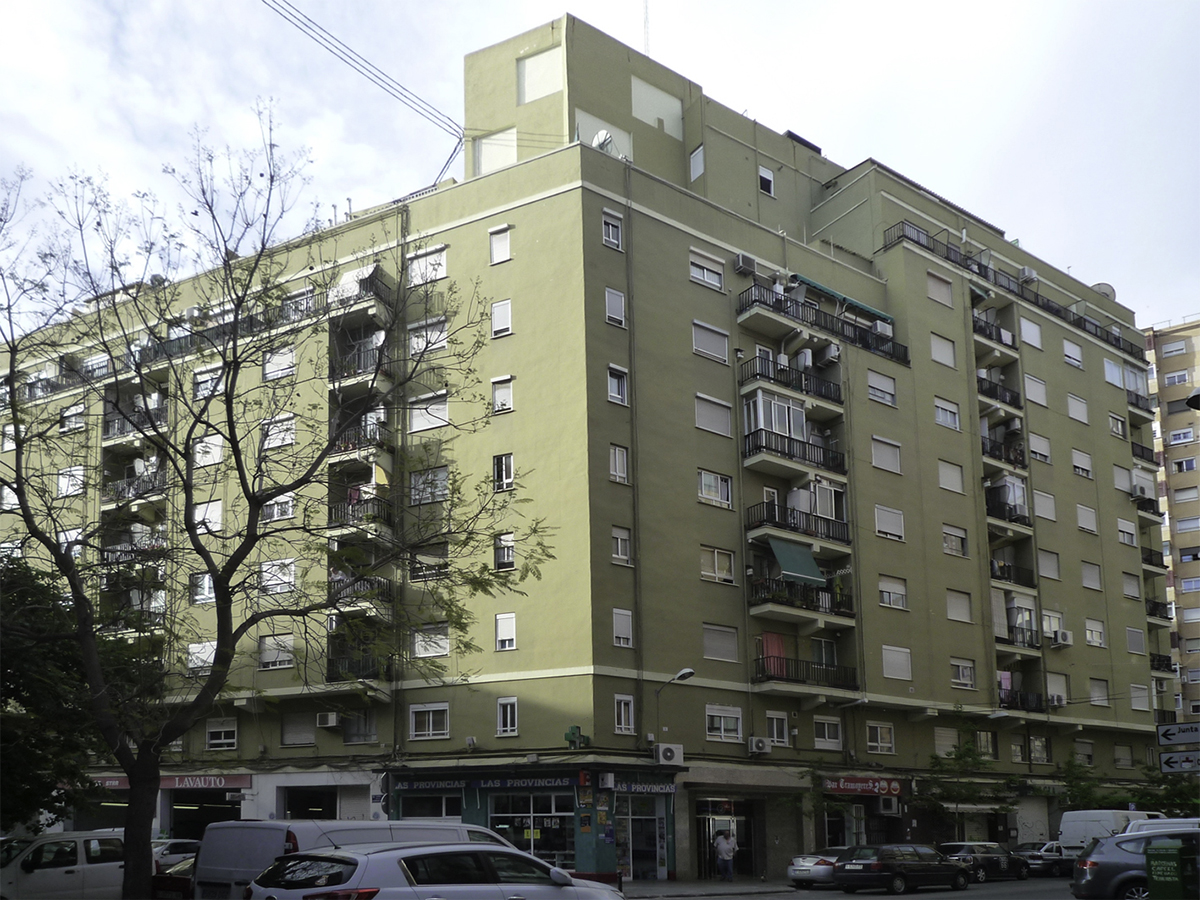 The part of Benimaclet between the train tracks and the old Camino de Tránsitos, now called Primado Reig Avenue (limited on the sides by the old Benimaclet Road [Camino de Benimaclet], now called Cuenca de Tramoyeres Street, and the meandering Vera Road [Camino de Vera]) had always been used for agricultural purposes, except the two-floor buildings that came into being along the Benimaclet Road around Fresas Street, the Santa Ana barrio and a sprinkle of other buildings (Vista Alegre, Alquería de les Creus…).

In the 1940s, the quarters of the Guardia Civil were built in this area, and during the next two decades, the two sides of Primado Reig began to be filled as a consequence of the construction of housing on both sides of the New Alboraya Road (Camino Nuevo de Alboraya) (today Jaime Roig and Emilio Baró streets).

In this street, in 1967, the block known as “The Benimaclet Beehive” (La colmena de Benimaclet) was finished, close to the Guardia Civil quarter. The promoter of this special housing construction was Jaime Gómez Peris, and Eduardo Giménez Casalíns, an architect, designed it originally from Murcia, between 1961 and 1964. It is a green-coloured volume in the shape of an almost closed C, very compact in it exterior alignments (along Primado Reig Avenue, Cuenca Tramoyeres and Guardia Civil streets and Río Duero square) but with a large interior yard open on its backside.

There is only one entrance (Cuenca de Tramoyeres 2) with a staircase and two elevators that permit access, by way of hallways open to the courtyard, to the ten floors with 181 apartments. Most of these consist of entrance hall, kitchen/dining room with an open terrace, bathroom and three bedrooms, two of which face the hallway.

What is special about the building is its urban placing and above all its character of vertical corrala. The corrala, a type of building with housing units placed around a courtyard, is rare in Valencia, and where it does exist, it is always in the context of two-floor housing units, like the ones in the next door building, “Edificio Aviación,” an excellent and scorned construction designed in 1960 by the architects Camilo Grau and Joaquín García Sanz in order to consolidate the curved corner between Primado Reig and Calderón de la Barca.

PreviousNext
1234567
The Centre for Social Services